Anna and the French Kiss (#1) by stephanie perkins

Anna is looking forward to her senior year in Atlanta, where she has a great job, a loyal best friend, and a crush on the verge of becoming more. Which is why she is less than thrilled about being shipped off to boarding school in Paris–until she meets Étienne St. Clair. Smart, charming, beautiful, Étienne has it all…including a serious girlfriend.

But in the City of Light, wishes have a way of coming true. Will a year of romantic near-misses end with their long-awaited French kiss?

After hearing that all the girls I know were reading this, I had to too! I had to see what all the fuss was about, and I’m glad that I finally picked up my copy at the library. The story revolves around an 18-year old girl, Anna, from San Francisco whose parents decide to admit her to an international school in the most romantic city of them all: Paris.

Anna is basically a perfect image of a “normal” teenage girl. She deals with her identity, guys, and family problems. It tends to get a bit dramatical once in a while, but it helps the plot forward. In the beginning, a new start scares her, but slowly her fear disappears and she starts finding the different treasures around in Paris. If you have ever been to Paris, you will love hearing about the smells, noise, culture, history, architecture and the whole setting that the story is told within. Stephanie Perkins has captured this perfectly! I remember visiting Paris in 2012 and falling completely in love with the city, while experiencing it on my own.

The plot revolves around falling in love and most importantly; the boy, Etienne St. Clair. While getting the inside point of view from Anna, it’s easy to identify with the burden of falling in love. Etienne St. Clair has a girlfriend and she desperately longs for him, but is it possible for her to keep him just as a friend? Or will she be able to eventually getting her French kiss?

“I don’t want to feel this way around him. I want things to be normal. I want to be his friend, not another stupid girl holding out for something that will never happen.” 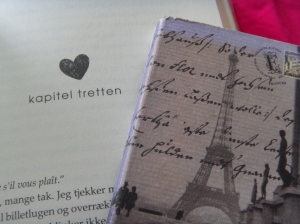 It was not an interesting protagonist, as I could have hoped for. She is very insecure and gets scared easily, especially when comes to falling in love, friendships and her own fear of being alone in a country, where she doesn’t even speak the language. Although, Anna’s behaviour seems to repeat itself throughout the story, she is a perfect example of someone young falling and being in love. I think everyone can relate to that subject, right?

“Anna and the French Kiss” is a story about conflicts, friendships, growing up, finding your own place in life, love, falling in and out of love. All in all, it’s the story of finding something familiar in an unfamiliar setting, no matter if it is a specific place or within yourself.

“Is it possible for home to be a person and not a place?”

It was a great book and easy to read. I could definitely recommend it for a relaxed afternoon in the sun. It is indeed very romantic and girly, but sometimes it’s nice to read a book like this. This is a great book about falling and being love, being young, finding your own place in life and doing it while living in the arty, cultural and historical city of Paris. I will look forward to reading the others in the series (#2“Lola and the Boy Next Door” and #3 “Isla and the Happily Ever After”).

One thought on “Anna and the French Kiss #1”