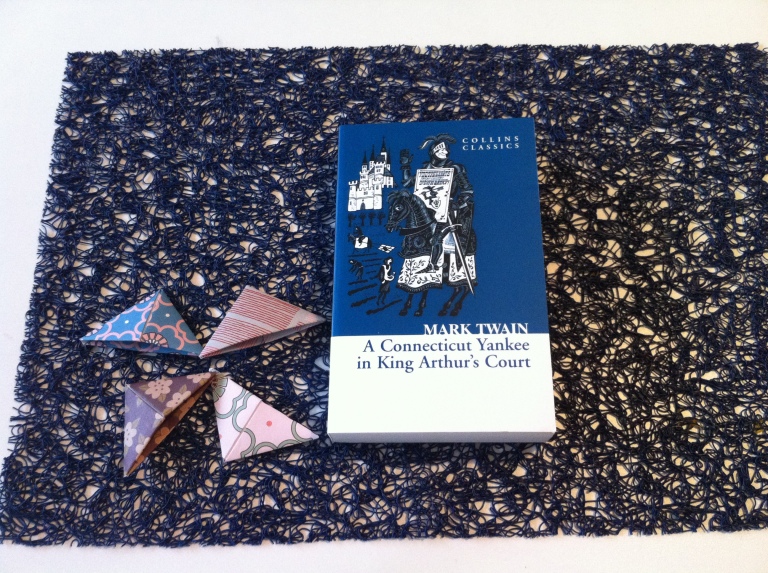 In A Connecticut Yankee in King Arthur’s Court (1889), the main character, Hank Morgan, jumps back in time from the 19th Century to the sixth Century. With this novel, Mark Twain criticizes the hierarchy in society and the social inequality provided by the Catholic Church. He wishes for a more democratic society, e.g. where everyone has the possibility to learn to write (not only the rich and Christian). The central themes are; idealism, the wish for social justice, a society which is not controlled by religion and the fact that technology could be the people’s “rescue”, and improve and bring positive social change in form of a democratic system. His motive for writing this unusual novel was to ridicule Sir Walther Scott because he disapproved his works – he even blamed him for encouraging the American Civil War, even though it was three decades after Sir Walther Scott’s death.

Mark Twain’s work is written in a modern language and his writing style includes; dialogues with 1) old expressions to symbolize the characters of the sixth Century, i.e.: “hath” and “meseemeth”, and 2) modern language when Hank Morgan speaks, e.g. when Hank is trying to teach Sandy the term of “hanging out”; ‘Ah, I understood thee not […] Hang they out – hang they out – where hang – where do they hang out; eh, right so; where do they hang out. […] I will repeat it anon and anon in mine idlesse, whereby I may peradventure learn it […] already it falleth trippingly from my tongue’, which is also a humorous feature in the tale. At the same time, he uses picturesque descriptions, e.g.; ‘In the town were some substantial windowless houses of stone scattered among a wilderness of thatched cabins; the streets were mere crooked allies, and unpaved; troops of dogs and nude children played in the sun and made life and noise’ and uses contrasts, e.g. the contrast between a technological society versus a primitive one. ‘The burlesquing treatment of chivalry in Mark Twain’s ‘A Conneticut Yankee in King Arthur’s Court’ is in contrast to the usual romantic idealization […]’, which is seen in the works of Malory and Tennyson.

In his work, he uses; 1) criticism towards the British feudal society with social inequality, and 2) satire, e.g. when he tries to change the ways of society by being “The Boss”, with his industrial and technological inventions, and it ironically ends in chaos (instead of harmony). Furthermore, the humor is already seen in the beginning of the novel, when Hank tells the people that he is magical in order to rise in hierarchy. Another example is when the king is dressed in clothes as the other knights and tries to act as a knight, and not a king – again a satirical criticism to the British feudal social structure; that even a king should be treated as the common man and the other way around.

The most essential themes of the story are shown as dualism, which is usually seen in tales from medieval literature; 1) the search of the good (versus the evil) and 2) the fact that evil is associated with industry, technology and war, which can be seen as a symbolic criticism of the American society of the 19th Century; the Gilded Age (1870-1900), when America experienced a boom in manufacturing, and many people lived in poverty and only few were allowed to enjoy wealth because of social inequality. Mark Twain’s attitude to the rich and to the aristocracy of the southern states of America can also be seen in e.g. ‘The Adventures of Huckleberry Finn’, where he criticizes the wealthy Miss Watson for her hypocritical religious and moral values, and indirectly criticizes the southern nobility of – especially – French origin, through the criminal but powerful characters of the “Duke” and the “Dauphin”. In contrast to this opinion, the character of Sandy, (who goes with Hank on his journey, whom he ends up marrying) believes fully in the social stratification, and must be based on the character of Lynette (from Malory’s tale).

The genre of his novel is science fiction and fantasy, but Twain uses elements from old literature with satirical descriptions and Romantic notions of chivalry. The similarities to “Le Morte D’arthur” are; 1) the use of the tale in the beginning of the novel, and 2) King Arthur is mentioned.