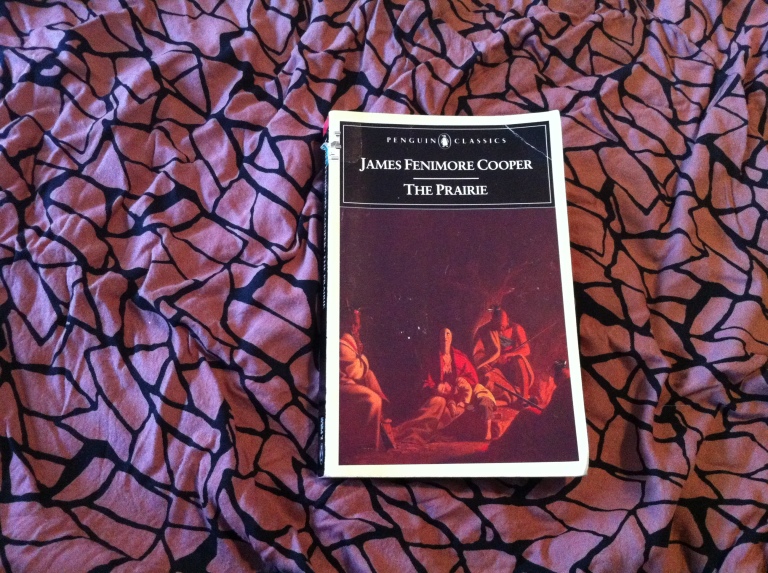 The Prairie is the fifth story in the Leatherstocking Tales but can be read individually. It focuses on the Native Americans and presents many sensuous descriptions of the landscape and the different conflicts which take place during the novel’s plot.

Furthermore, it shows the difference of British literature and American literature at this time (1820s-1840s). Whereas the British literary tradition had existed longer, the American literary scene was not as established, like the society of America at this time (naturally, this has to do with political reasons, e.g. social classes and politics + the fact that America was established later as a nation than Britain).

This novel shows a classic situation between the white man and the Native American. This was a part of the Frontier tradition. Cooper was mostly famous for his history accounts and travel sketches, which were popular in his time. However, this novel is very interesting. I specifically liked the focus on territory, which naturally is highly important at a time, when American society is still trying to establish itself. In the novel, there are many examples of the issue of territory, both physical and psychological borders

One could compare Cooper to Sir Walter Scott. Both authors wrote historical fiction in the same historical time period. Whereas Sir Walter Scott focused on external elements, e.g. dealing with political aspects of the historical period, such as politics and Scottish identity (establishing a national identity as non-British), Cooper focused on internal elements, most importantly: forming American society and culture, which was still happening at this time.

With a literary angle, mostly looking into territory and borders, I found the novel useful and interesting. The language allowed many examples of this specific angle. However, it was a long read and at times I found it to slow. This writing style could also symbolize the brutality and simple life of the Native Americans of this time. Well, read for yourself and let me see what you think!