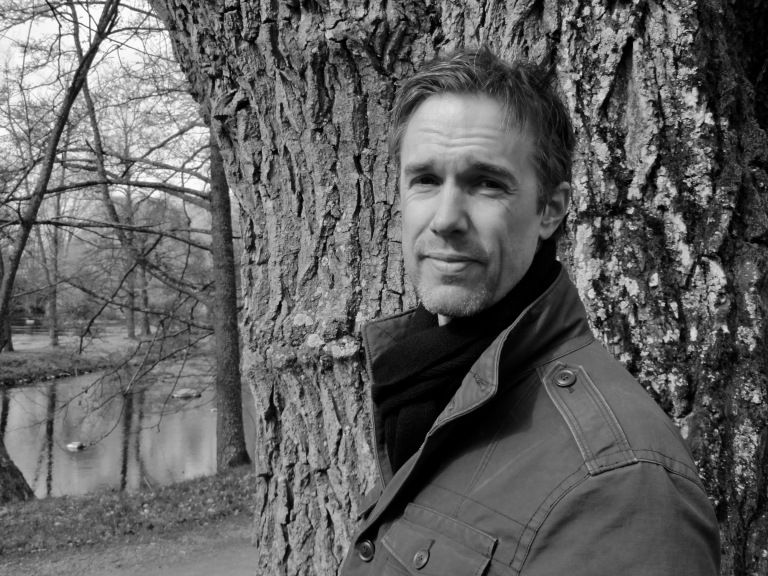 Mention three fun facts that your fans maybe don’t know about you
– Back in the mid-nineties I was the leader of the proud Cnaetophs Clan. We were one of eight clans invited to play in the first season of the Swedish Quake league (for those of you old enough to remember that glorious computer game). Broadband connections were rare in the olden days, so we used to sneak into a clan member’s university building late at night for our weekly game. Often we got thrown out by security. Game-wise, we stunk. But since we were all-around incompetent non-competitive nice guys the other clans welcomed us as cannon fodder.
– I make a mean Thousand Island dressing.
– I’m quite tall so I keep bumping my head into things.

And sadly, that’s about as fun as the facts get …

When did you know that you wanted to become an author?
I’ve always enjoyed writing in one form or another. But it wasn’t until my early thirties that I realised that I wanted to write books. Before that, I’d mostly written short stuff for radio and newspapers.

How long have you been writing? And what started it?
I think I’ve always been writing. I wrote my first “book” when I was ten. The title was “Kurt” and it was a series of short stories about a man called “Kurt”. Heavily inspired by Donald Duck comics. During my high school years, I used to write Ray Bradbury-inspired short stories for my Swedish exams. I was encouraged by my Swedish teacher, who enjoyed my plots and twists and gave me great feedback.

Who discovered you? (Did you contact publishing houses? How was the process?)
I sent my first novel (The Hunt for the Energy Gizmo, “Jakten på Energimojängen” in Swedish) to I don’t know how many publishers. I’d put a heavy envelope in the mail (no email submissions back in those days), experienced a couple of months of bliss of having submitted the damn thing, before entering a couple of months of agony, fearing the return of the heavy envelope – now slightly heavier from the form rejection letter. Finally, after a couple of years of rejections, editing and re-writing, killing darlings, leaving out when in doubt, etc., the book was accepted by a publisher.

How many books have you published (so far)? And which genre?
I’ve published four books, in a variety of genres. One is a novel about a rock star who fakes his own death to figure out the meaning of life (“Yoga for Rock Stars”); another is the previously mentioned children’s adventure novel about a great invention being stolen for sinister purposes (“The Hunt for the Energy Gizmo); the third is a children’s non-fiction book about medicines and diseases (“Drugs and Bugs – a little book about medicines”); and my latest book is a YA novel about a guy who finds out that he did something unwise in a previous life, which he now – in his current life – needs to set straight, or the world is coming to an end (“The Prince of Soul and the Lighthouse”).

Why this story? What made you choose this specific theme?
I think it was several ideas that came together in The Prince of Soul and The Lighthouse. The “light at the end of the tunnel” of near-death experiences, for example, which I’d explored a bit in a previous (unpublished) short story, and which now came to good use, including George’s undead granddad, who was part of that short story as well. The occult colonel came from another short story. And the Tibetan monk Tenzin is a reincarnation of a wise old woman from a fantasy novel that I was working on for a while, but never finished. As you can tell, I am all for recycling. Sustainable writing for a sustainable world … 😉 And when I came to New Zealand everything fell into place. The landscape and the country turned out to be the perfect setting for the story, and writing in English brought out new ideas and angles.

What inspires you to write? Which authors have inspired you? (Music, art, things in life?)
Things that inspire me to write: clear autumn days. Mountains. A blank Word document. Rooibos tea. Decaf coffee. Good books. Bad books. A black notebook. A nice – but not overly fancy – pen. Old dilapidated stuff, worn by time and people. Stephen King’s biography “On writing”. Folksy music (Mumford & Sons, Oysterband – though I never listen to music when I’m writing. I found that the mood of the tunes influence me too much. I end up thinking I’ve written the best chapter ever, just because I happened to be listening to some brilliant music while writing it; and the next day when I re-read it, without the music, it’s awful.)

What is the message of your book? How should the reader interpret it?
To me, the book encourages a sense of confidence in existence. If anyone else should get the same feeling, I’d be very happy. If not, that’s fine as well.

How do you identify with the character(s) in your book?
I think there’s a bit of me in a couple of the characters. Especially George. I too used to dream of becoming a rock star, and the lyrics in George’s song are taken from a song that I wrote when I was about his age. “I was left here with my dreams …” Lyrics that make me cringe more than a little bit when I read them now.

What are you currently reading?
I’m a very slow reader and I tend to pick up several books as I go along – like a whale with barnacles – which slows me down even more. Currently I’m reading “Born to run” by Bruce Springsteen, “Infinite Jest” by David Foster Wallace, “A Brief History of Seven Killings” by Marlon James, “The Blackhouse” by Stephen May and “A farewell to arms” by Ernest Hemingway.

Mention 3 book titles that you wish to recommend
“Catch-22” by Joseph Heller. “The Brief Wondrous Life of Oscar Wao” by Junot Diaz, and “Railsea” by China Mièville.

When is your next book going to be published?
In the beginning of 2018. It’s a deep-sea steam punk adventure for middle grade readers, set in a far future where great powers are colonising the seafloor with mining colonies, orca-riding soldiers, kelp farms, tuna herders, etc. Timo, 14 years old, has a brother who’s gone off to work in the deep-sea mines of New Stockholm, while Timo himself has been kidnapped by smugglers doing trade between the colonies. Sharks, villains, ocean-dwelling aliens aplenty! (My absolute favourite living organism in the world is the Great White Shark, so it’s been a treat to write it!)